A Dutch tradesman from Delft, Netherlands, Leeuwenhoek did not pursue a higher education. At age 16 he became apprentice to a Scottish cloth merchant in Amsterdam, and eventually moved back to Delft, where he hung out his own shingle as a draper. A perfectionist in all respects, he was not satisfied using available lenses to examine his fabrics, so he learned to grind his own. This led to his crafting simple microscopes. He's believed to have been inspired to take up microscopy after reading Robert Hooke's popular illustrated book Micrographia, which depicted Hooke's own observations with the microscope (Dobell 1960).
Hand-Crafted Microscopes
Leeuwenhoek constructed more than 500 "microscopes," of which fewer than ten survive to this day. In reality, these instruments were simply powerful magnifying glasses, not the compound microscopes we are familiar with today.
Article Summary: Learn how Antonie van Leeuwenhoek, an uneducated Dutch merchant, discovered the microscopic world of animalcules and forever changed biological science.
Leeuwenhoek: Microbiology Pioneer

​Page last updated: 10/2014
SPO VIRTUAL CLASSROOMS
A fabric merchant who invented the microscope? Who’d have imagined? Although many descriptions of Leeuwenhoek’s life and work are not always accurate, it is absolutely true that the man’s boundless curiosity and open mind free of scientific dogma made him one of the most important figures in the history of biology.
Leeuwenhoek's Lenses

Below is a poem about Van Leeuwenhoek by Maxine Kumin, from the fantastic book of science-related poetry The Tree That Time Built.
The Microscope
Anton Leeuwenhoek was Dutch.
He sold pincushions, cloth, and such.
The waiting townsfolk fumed and fussed
As Anton’s dry goods gathered dust.
He worked, instead of tending store,
At grinding special lenses for
A microscope. Some of the things
He looked at were: mosquitoes’ wings,
the hairs of sheep, the legs of lice,
the skin of people, dogs, and mice;
ox eyes, spiders’ spinning gear,
fishes’ scales, a little smear
of his own blood, and best of all,
the unknown, busy, very small
bugs that swim and bump and hop
inside a simple water drop.
Impossible! Most Dutchmen said.
This Anton’s crazy in the head!
We ought to ship him off to Spain!
He says he’s seen a housefly’s brain!
He says the water that we drink
Is full of bugs! He’s mad, we think!
They called him dumkopf, which means dope.
That’s how we got the microscope.

Leeuwenhoek Increased Magnification
However, early compound microscopes could not effectively magnify objects more than thirty times natural size. Leeuwenhoek's simple microscopes magnified objects to over 200 times actual size, with clearer and brighter images than any of his predecessors had achieved. It is even suspected that van Leeuwenhoek created some microscopes that could magnify up to 500 times (Dobbell 1960).
Leeuwenhoek's Animalcules
Leeuwenhoek was also distinguished by an insatiable curiosity to observe just about anything that would fit under his lenses, and he made careful, detailed observations of what he saw. Through these observations, Leeuwenhoek succeeded in making some of the most important contributions in the history of biology. He discovered microscopic organisms (such as bacteria, protists, nematodes, rotifers), which he dubbed “animalcules”, as well as sperm cells, blood cells, and muscle fibers. Leeuwenhoek’s discovery or microorganisms, along with experiments done by Francesco Redi, Lazzaro Spallanzani and Louis Pasteur, helped put to rest the erroneous belief in spontaneous generation (living things commonly arising from nonliving matter) (Dobell 1960).
Leeuwenhoek Inducted Into Royal Society
After twenty years of careful observation, Leeuwenhoek revealed his findings to the Royal Society of London. His important research, which was widely circulated, exposed the existence of a vast array of microscopic life to the scientific community. Although Leeuwenhoek had no formal scientific training, the astounding and detailed nature of his discoveries resulted in his induction as a full member of the Royal Society in 1680, where he joined the ranks of many other scientific luminaries of his day.
Leeuwenhoek's Secrets
Although his findings were well-known, Leeuwenhoek was very secretive about how his microscopes were constructed, including the critical secret of how he crafted his lenses. He died in 1723, taking many mysteries of his genius with him to the grave. (Ford 1991).
Sources and Resources
Compared to our modern microscopes, Leeuwenhoek’s were extremely simple devices. A single lens was mounted in a tiny hole drilled into a small brass plate. The specimen was mounted on a sharp point in front of the lens, its position and focus adjusted by turning two screws. The instrument was no more than 4 inches long and had to be held up very close to the eye. Using it required good lighting and much patience.
In reality, more complex, compound microscopes had been invented nearly forty years before Leeuwenhoek was born, and had already been used to make important discoveries. So although Leeuwenhoek is often referred to as the inventor of the microscope, he was not (Ford 1991). 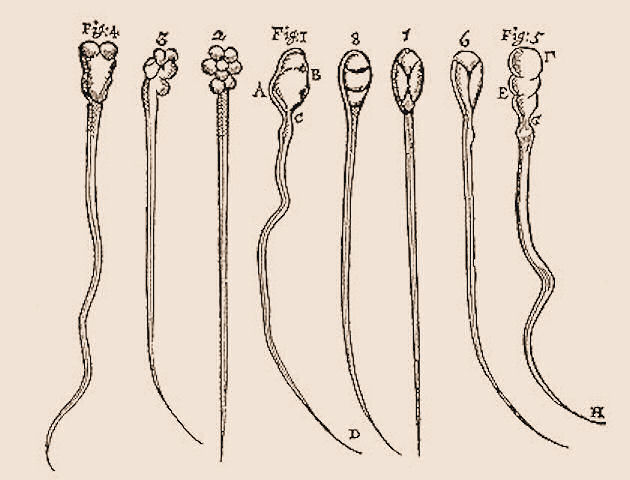 Sperm from rabbits and dogs, drawn by Antonie van Leeuwenhoek in 1678.