1
1
1
Fixed Action Patterns: Instinctive Behavior FAPS - P2
SPO VIRTUAL CLASSROOMS
Page last updated:
9/2017
Red-Bellied Stickleback Aggression
Niko Tinbergen also studied a species of fish commonly called the red-bellied stickleback. The male of this species turns bright red and blue during breeding season, a time when they are naturally aggressive towards other red-bellied sticklebacks.
This behavior is useful because the stickleback needs to secure an area to use for obtaining food and mating with females. The color-induced aggression helps keep interlopers out.
The FAP of Yawning
Although fixed action patterns are most common in animals with simpler cognitive capabilities, humans also demonstrate fixed action patterns. Yawning is a great example. Yawns last around 6 seconds and are difficult to stop once started.
We are triggered to yawn when we see another person (or animal) yawning. Even seeing the word 'yawn' may have triggered some readers to do so. And just try stopping in mid-yawn.
​You can't. Once you begin to yawn, this instinctive, hard-wired response must run its course, from beginning to end.
Trickery and FAPs
Some species have evolved to take advantage of the fixed action patterns of other species by mimicking their sign stimulus. The term used to describe the duplication of another species' releasing mechanism is known as code-breaking.
Examples of Code Breaking
Brood parasitism gives us one example of code breaking. This form of parasitism is when one species lays its eggs in the nest of another species, tricking the owner of the nest into parenting young that are not its own. This happens in the case of the North American cowbird and the European cuckoo, both brood parasites. 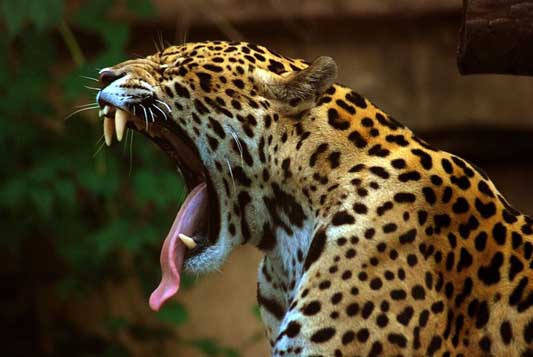 Chicks of these parasitic species push the eggs and hatchlings of the nest owners out of the nest. Then, being larger and louder than true offspring of the parent species, the cowbird hatchling provides a supernormal feeding stimulus to its 'adoptive' parent, which will cause the parent to forage more frequently than it normally would, all to satisfy this larger, impostor baby's demands. 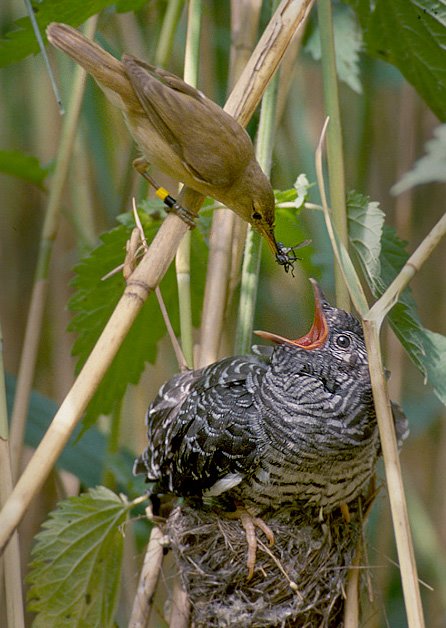 Instinctive Behavior of Siamese Fighting Fish
Male Betta splendens fish engage in instinctive display behavior when challenging other males or showing off to females.
Click here to learn more about these showy fish or see the Betta splendens
Behavior Lab Exercise.
SPO is a FREE science education website. Donations are key in helping us provide this resource with fewer ads.
Please help!
(This donation link uses PayPal on a secure connection.)