Coral Cactus
How to Care for Grafted
Euphorbia lactea "Cristata"
1

The Coral Cactus is not really a cactus, but two succulent plants joined together to form a beautiful “Franken-plant." Fan-shaped
Eurphorbia lactea
is typically grafted on top of a Euphorbia neriifolia or a cactus root stock.
Article Summary: Similar in appearance to ocean coral, the Coral Cactus, Euphorbia lactea "Cristata", is actually two plants in one. Here's how to care for this unusual beauty.
How to Care for Coral Cactus: Euphorbia lactea crest
1

SPO VIRTUAL CLASSROOMS
The showy part of the plant, the section that resembles coral, is called the crest, and is the result of a rare mutation in Euphorbia lactea favored by horticulturists who mass produce these plants for sale.
The grafting is accomplished by using a sharp, sterile knife to make a convex, v-shaped cut at the bottom of the crest and a concave, v-shaped cut in the top of the root stock. 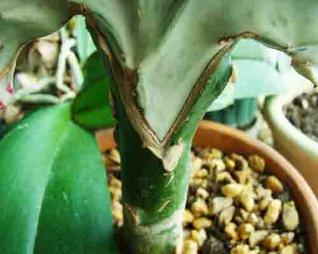 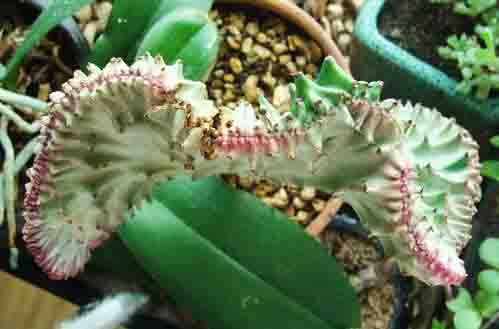 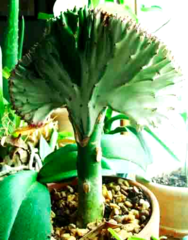 Eurphorbia lactea grafted on top of a Euphorbia neriifolia root stock. See the "v" where the two plants fused together?
How to Care for a Coral Cactus
The Coral Cactus is low-maintenance and very easy to care for, if not over-watered. Here are the basics:
The newly cut sections are then joined together with twine and covered with grafting wax to keep the exposed tissue from drying out. Rubber bands can also be used to hold the two sections together until the graft heals and the two plants become one.
How To Graft Cacti
Fascinating video on how grafting is done!