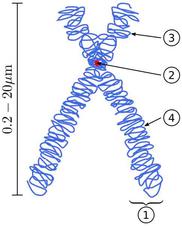 Preparing for Nuclear Division
For most of the cell cycle, the DNA molecules are in very long strands called chromatin. But when the cell prepares to divide, it must pack its DNA for the move. So prior to cell division, the chromatin condenses. This replicated DNA molecule, in its condensed form, is now referred to as a chromosome.
Students often become confused when it comes to the genetics terminology associated with chromosomes and chromosome number. What are homologous chromosomes? What are duplicated chromosomes?

SPO VIRTUAL CLASSROOMS
Copying DNA
Before a cell divides, it must make a copy of its DNA (nucleic acid) so that each daughter cell has a complete copy of genetic information. Each individual DNA molecule is the material of one chromosome, and the process of copying the DNA is called replication.
Semi-conservative Replication
DNA is a double-stranded molecule. Each strand holds the same genetic information. Therefore each strand can serve as a template for the production of a new strand. The template strand is preserved and the new strand is assembled from nucleotides (the small monomers that together make nucleic acids). The resulting double-stranded DNA molecules are identical, and are linked together until the process of nuclear division (separation of the duplicated genetic material). 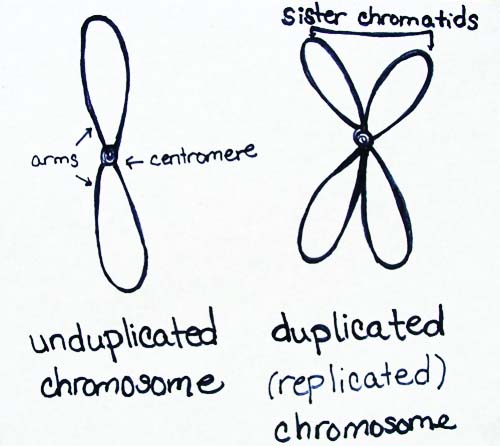 What are chromatids? How do all of these terms differ and how do they relate to each other? To understand these terms, we must first review cell division.
Cells Divide to Make More Cells
During the cell cycle, somatic cells (non reproductive cells) of eukaryotic organisms grow and divide. In this process, called mitosis, a single cell ('parent cell') splits into two identical 'daughter cells'.

DNA molecule replicating: Strands separating so that the DNA can be read and replication can occur.
But, remember, there are two copies attached to each other until nuclear division. Each of the two copies of a chromosome are designated as a sister chromatid and they are physically linked together at a point on the chromosome called the centromere.
Once the chromosomes move to opposite poles, the dividing cell reforms a nuclear membrane around each of the two areas of separated genetic material. The cell itself then proceeds to divide in a process called cytokinesis, and what was once one cell becomes two, completing the process of mitosis.