Many prokaryotes
have distinct appendages, delicate strands made of protein, that extend beyond the surface of the cell. Whip-like flagella enable some bacteria to move about. Shorter extensions, called fimbriae, allow bacteria to adhere to surfaces and, for
Article Summary: Prokaryotic cells can have a variety of surface appendages-- flagellum, fimbria or pilus--that enable them to move, adhere to surfaces and even infect host cells.
External Structures of Prokaryotic Cells 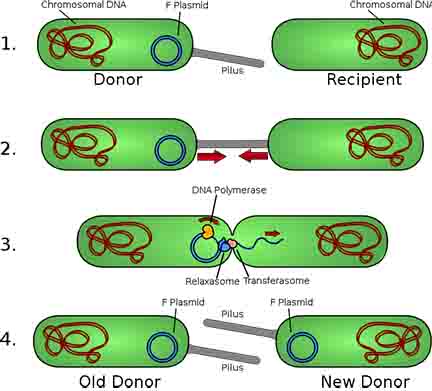 Bacterial conjugation with sex pilus.
Bacterial flagella are a wonder in locomotive ability, able to propel a bacterium 20 bacterial cell lengths per second.
Many different types of bacteria have flagella, but one interesting example of a flagellated bacterium is Helicobacter pylori, a spiral-shaped bacillus that causes stomach and duodenal ulcers. H. pylori uses its multiple, polar flagella to penetrate the thick coating of the stomach epithelium, burrowing in beyond the reach of caustic stomach acids.
Spirochete Endoflagela (Axial Filaments)
Spiral-shaped bacteria, called spirochetes, have special flagella that are tightly wound around their tiny cork-screw shape. These unique flagella, called endoflagella, together form what is called an axial filament. Rotation of the endoflagella causes the axial filament to rotate, and propels the spirochete in a twisting motion. Treponema pallidum, the bacterium that causes syphilis, moves around this way.
Gram-negative Bacterial Fimbriae
Most Gram-negative bacteria have these short, fine appendages surrounding the cell; in contrast to Gram-positive bacteria, which never have fimbriae.
These protein projections have no role in motility, but instead help bacteria adhere to surfaces and infect host cells. Fimbriae are a major factor in bacterial virulence (the ability of a bacterium to cause disease).
Bacteria, such as Neisseria gonorrhoeae and N. menigitidis, use their fimbriae to attach onto host cells, causing gonorrhea and bacterial meningitis respectively. These bacteria would be avirulent (unable to cause disease) without the use of their fimbriae. 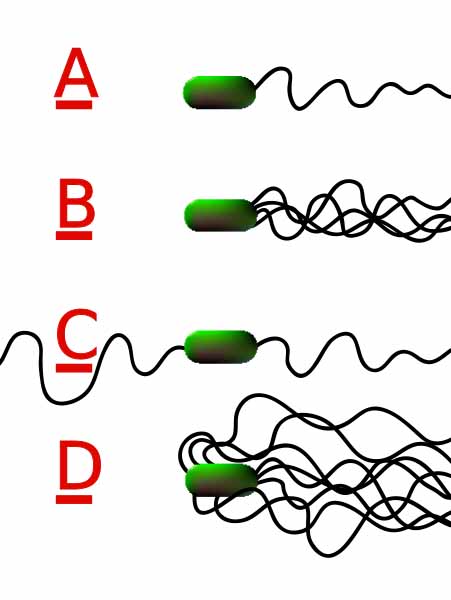 for pathogenic (bad guy) bacteria, enable them to infect the cells of a potential host. Some bacteria even have extensions called sex pili, that they use to share some of their genes with other bacteria. Below is a breakdown of the main bacterial surface appendages.
Bacterial Flagella Placement and Number
Flagella (singular flagellum) are long, thin extensions, like rotating propellers, that allow the bacteria that have them to move about freely in aqueous environments. Some eukaryotic cells (such as human sperm for example) also have flagella, but prokaryotic and eukaryotic flagella are constructed and operate in distinct ways.
The placement and number of bacterial flagella are distinguished using specific terminology. The four main placements of prokaryotic flagella are:

" What am I, Life? A thing of watery salt

Held in cohesion by unresting cells,

Which work they know not why, which never halt,

Myself unwitting where their Master dwells.
I do not bid them, yet they toil, they spin

A world which uses me as I use them"
John Masefield
(1878 – 1967))
Go to >
Virtual Cell Biology Classroom
CLASS NOTES
from the free STEM
education site
Science Prof Online
Conjugation Pili of Bacteria
These proteinacious tubes are longer than fimbriae, and usually shorter than flagella. They can be used, like grappling hooks, to move bacteria around. Some pili, called conjugation pili, are used to achieve what is a close to having sex as a bacterium can get. One bacterium may use a conjugation pilus to ‘dock’ with another bacterium, then the donor bacterium transmits some of its genetic information to the recipient, a form of horizontal gene transfer.
Sources and Resources
​​