Clostridium bacteria do have one serious weakness, they are killed by oxygen. So one would think that they’d be easy to control in an atmosphere full of oxygen, but members of this genus also have a powerful trick up their sleeve. These bacteria are able to produce endospores.
How Endospores Help Bacteria Survive
Endospores are dormant structures that help bacteria survive just about anything; starvation, desiccation (drying out), radiation, high temperature, and chemical disinfectants, to name a few.
Article Summary: Several bacteria in the endospore-producing genus Clostridium are dangerous disease causing pathogens due to the potent toxins they produce.
Four Bacterial Pathogens of the Genus Clostridium
Virtual Microbiology
Classroom
You have free access to a large collection of materials used in a college-level introductory microbiology course. The Virtual Microbiology Classroom provides a wide range of free educational resources including PowerPoint Lectures, Study Guides, Review Questions and Practice Test Questions.

SPO VIRTUAL CLASSROOMS
SPO is a FREE science education website. Donations are key in helping us provide this resource with fewer ads.
Please help!
(This donation link uses PayPal on a secure connection.)
Endospores can lie dormant for decades and are found throughout the environment; in soil, water, sewage and in the intestines of humans and animals. So although Clostridium cells are killed by oxygen, their endospores are not.
Clostridium tetani and Tetanus
People often believe that tetanus boosters are necessary to prevent lockjaw from stepping on a nail. That isn’t the entire story. It is not rust that causes tetanus, but bacteria.
A rusty nail is a nail that has been out in the environment for a considerable amount of time, and thus is more likely to have endospores on it. If those endospores are from C. tetani, and they get into the body, they sprout and grow bacteria. When C. tetani bacteria die, they release a neurotoxin that causes muscles to contract and inhibits muscle relaxation. This toxin is potentially fatal, since the heart is made of muscle, and can beat irregularly when affected this way. In addition, if the diaphragm contracts and doesn’t release, it interferes with normal breathing.
Clostridium perfringens, Food Poisoning and Gas Gangrene
C. perfringens produces 11 toxins that affect blood cells and the circulatory system. Some strains of C. perfringens are more virulent (dangerous) than others. Less virulent members of the species are commonly found in the GI tract of humans and animals. More virulent members, ingested in large numbers (commonly from contaminated meat), can cause food poisoning.
When C. perfringens is introduced into the skin, typically in a wound or incision, the toxins cause massive cell death and affected tissues turn black and smell foul due to bacterial waste products.
Clostidium botulinum and Botulism
The toxin produced by C. botulinum is one of the most toxic substances known. It is a neurotoxin able to cause three forms of botulism: food-borne botulism, infant botulism and wound botulism. Whichever way the endospores are introduced to the body (orally or in a wound), the symptoms of intoxication are the same. Unlike C. tetani, C. botulinum produces a flaccid (rather than rigid) paralysis. Death, although rare, results from asphyxiation due to an inability to use muscles for respiration.
Clostridium difficile and Pseudomembranous Colitis
This Clostridial species can be normal flora commonly found in the intestines, but does not normally exist in large numbers. When a patient takes broad-spectrum antibiotics, killing the body’s bacteria, C. difficile endospores can germinate after the antibiotic clears and quickly overpopulate the intestines, releasing toxins and enzymes that destroy the intestinal wall. This causes massive diarrhea, and can potentially perforate the intestinal wall.
Sources and Helpful Links
​Page last updated: 7/2014 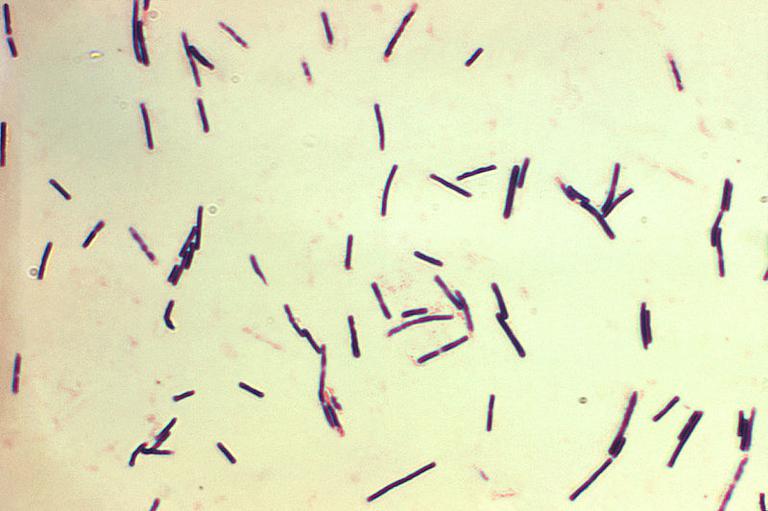 Gram stained Clostridium perfringens bacillli, one of  the agents of gas gangrene.